Home — Blog — News — Trans Awareness Week: the challenges and joys of realising and understanding who you are

This blog post was originally posted a few years ago on Reading on the Train for National Coming Out Day, by Oliver Townsend, Head of PTS and New Systems Alliance.

Me and Ol have been waiting years to write this together. So firstly, a bit from me about my experience, followed by a short bit from Ol’s perspective.

This is a moment I have thought about, worried about and dreamed about for so long – and now I have no idea how to begin!

So, in the words of Maria von Trapp, let’s begin at the very beginning (a very good place to start!)…

I am a trans man. This means that I was born into a female body, but pretty early on, I realized that this was not the right body for me. I can’t tell you exactly how I knew this, but somehow there was a disconnect between the boy I was in my head, and the girl I was on the outside.

I was a “tomboy” – I liked having short hair, wearing jeans and t-shirts, and playing football or soldiers rather than Barbie – but it was more than that. I actually felt that I was a boy, and I remember the sadness I felt as I grew up and my body took me further and further away from that ability to “pretend” to be a boy I had as a child. Eventually, I decided that I may as well try to fit in, and I managed – on the surface – to be a “normal” young woman.

As I grew older and realized I was attracted to men, this confused me more. I appeared to be a heterosexual woman, but inside I still felt that I was a man, and felt an increasing connection to LGBT culture. I wasn’t very good at doing my hair and make-up, and was bullied at school for being a lesbian even though I wasn’t one – but did they know something I didn’t?

Did my confusing feelings of masculinity mean I was really a lesbian? But I knew I only liked men. What was I?

Eventually, the inevitable happened and I had a breakdown while at university. As a consequence, I went to see a very sympathetic counsellor and out it all came. This very caring professional couldn’t tell me if I was right or wrong, but she asked me to ask myself whether I would regret it if I didn’t try.

So, I told a bemused hairdresser I was playing the part of a boy in my university drama group’s annual play, and got my hair cut short. I bought some jeans, shoes and shirts from the boys’ department at Primark (in those days I was small and skinny enough to fit into them!). I searched online and eventually found and bought a special tight top called a binder, to flatten my chest. And I knew that this was right for me the first time I got dressed up in my boys’ clothes and got called ‘mate’ by another man.

Was this process easy? Could I just one day decide ‘OK, I’m a man now’ and walk into the toilet, changing rooms, etc of my choice? No, it was not, and no, I couldn’t.

It was really, horribly, hard. My family struggled greatly, having never had any inkling really that I felt this way. People at university – even my lecturers – treated me like a bit of a joke. Every time I didn’t ‘pass’ as male, and someone called me ‘she’– even though to be honest, this was understandable, given that I had a high voice and no beard – it hurt.

Going into the men’s toilets, having to wait for a cubicle that might not have a locked door, was terrifying – and going into the women’s toilets got me hostile stares and comments from women who understandably were confused that someone who looked like a teenage boy was in their space.

The four years it took me to get seen at a specialist gender clinic in London, and to finally get the hormones that would help me look and sound more masculine, was how I imagined it must feel to be stuck in prison when you’re innocent. The surgery I had to get a masculine appearing chest was painful, but not as bad as binding prior to surgery, which restricted my breathing and squashed my ribs. I didn’t have much money because I struggled to get employment, because without testosterone I looked like a teenage boy and, despite having a degree, employers would not take me seriously.

In those days, there wasn’t much information on the internet either, so I felt very isolated and alone. I even harmed myself and thought about how I might end my life on a number of occasions.

I’ve made it! Now, I am, on the outside, the man I am inside. I have a deep voice, I can grow a beard, I have a flat chest, I can lift more than some other lads my age in the gym. I am also happily in a relationship with my wonderful partner who knows my history, and doesn’t care. Going back to my earlier thoughts – yes, I was gay all along!

I haven’t written this because I want you to feel sorry for me, or for other trans people. But I do want you to understand what it truly means to be trans. We can lose our families and our friends, it can be difficult to find work, we can be the victim of prejudicial comments or stares from the public, even from people who should know better.

All this because we’ve had a conviction that we should be in a different physical form from the way we were born. And currently, the media have made us Public Enemy No 1. So, below, I’ve offered my counterpoint to the common views at the moment. You don’t have to agree – but please think about it.

We don’t just wake up one day and decide to identify as another gender, for a laugh. Currently, to legally change your gender, you’d have to apply for a Gender Recognition Certificate. This costs about £140, plus the cost of two letters from your specialist and a signed declaration from a solicitor, attesting that you really are trans. You can only apply for this after living in your chosen name and gender for a certain amount of time, and it takes a few months for the paperwork to be approved. This is by a panel, who meet in London to decide whether they’ll accept you into your chosen gender or not. You don’t just tick a box!

The vast, vast majority of us are not sex offenders who want to identify differently to spy on people in the toilets or assault people in single-sex environments. Yes, there have been prisoners who have transitioned and have committed sexual offences in their new gender’s prison. This is horrible, and deserves condemnation. But there’s sadly plenty of non-trans people who’ve hurt people in this way too.

We can’t get hormones or surgery quickly. The average waiting list for your first appointment at the gender identity clinic is about 2 years, and you have at least two appointments before you even get hormones, and then have to live as your chosen gender for at least 6 months prior to any surgery.

We’re not trying to ‘convert’ children to being trans by teaching them about LGBT issues in schools. We just want kids to know that it’s ok to be different. Maybe kids have trans parents or siblings – maybe they will grow up to be trans themselves – maybe they won’t. Besides, in this country, children cannot take hormones or have surgery until they’re 16, with a parent’s consent. They can only be prescribed hormone blockers, which temporarily pause puberty. This gives the child the chance to be sure of what they want.

Some of us are gay, some are straight.

You can’t always tell that someone is trans! Particularly when we’ve been on hormones for a while, we might not look any different from a cis (non-trans) person.

Not all of us decide to physically transition. For some, it can be enough to express gender in a different way. Some people identify as ‘non-binary’, feeling happiest when they’re not conforming to the norms of male or female. That’s ok.

Some people will try transitioning, and decide it’s not right for them. That’s ok too. How many of you have tried a new hair cut or a new suit and decided, a few weeks later, that actually it doesn’t work for you and you preferred your old style?

If you’re interested, please check out the following websites for more information:

Ol: Being honest and open

I didn’t want to say too much on here, because, quite rightly, it is Harry’s story to tell. But I did want to say that one of the (many!) reasons for us coming out as a couple, Harry as trans and me as a gay man in that relationship, is because we have both found it almost intolerable staying “in-closet” during the constant debates.

I have been in a relationship with Harry now for over ten years, and we are two months away from getting married. In that time I have seen him struggle, and we have both struggled together. Although I have not experienced what he has, I have, through seeing him, shared that terror of bathrooms from a different side. “Is he ok?” “Will someone hurt him?” “Do I need to go with him?” I have seen the fear of social interactions, seen the hurt in the early years when people would misgender him. I have seen the conflict between the physical reality at each moment in time, and the reality within his mind. And it has been hard. Sometimes gut-wrenchingly hard.

The context around all of this, as well, has been a society slowly starting to see trans people (yay), but then the inevitable backlash starting. The ‘othering’ of people, the promotion of fear, of trans people as people to be scared of. The laughing and dismissing of their lives and their own safety. To the point where “misgendering” or “othering” is seen as something that only namby-pamby progressives care about, rather than something linked to real and clear existence.

I’ve been a coward for a long time. I have thought it would be easier for us both to get on with life as it is now, where we can hide and pretend. But that has been harder and harder. Every day there seems to be a new attack on trans people, and whilst I am doing my best to speak out, I have always been terrified that I would inadvertently “out” us. And all the while, where normally progressive people across the world would be speaking out against injustice, people I know and still respect are silent. Or worse, sharing the lies and myths that damage and put people in danger.

My shorthand used to be “people I love very much” are trans.

So: the person who I love more than anyone else in the world is trans, and I am exhausted by the constant questioning, derailment and dismissal of his existence.

I am so happy that my family now know, and have been supportive. I feel like a great weight has been lifted from both of us.

And I hope I can now be a truthful and honest voice in the fight for trans rights.

Because that way I can help the person I love. 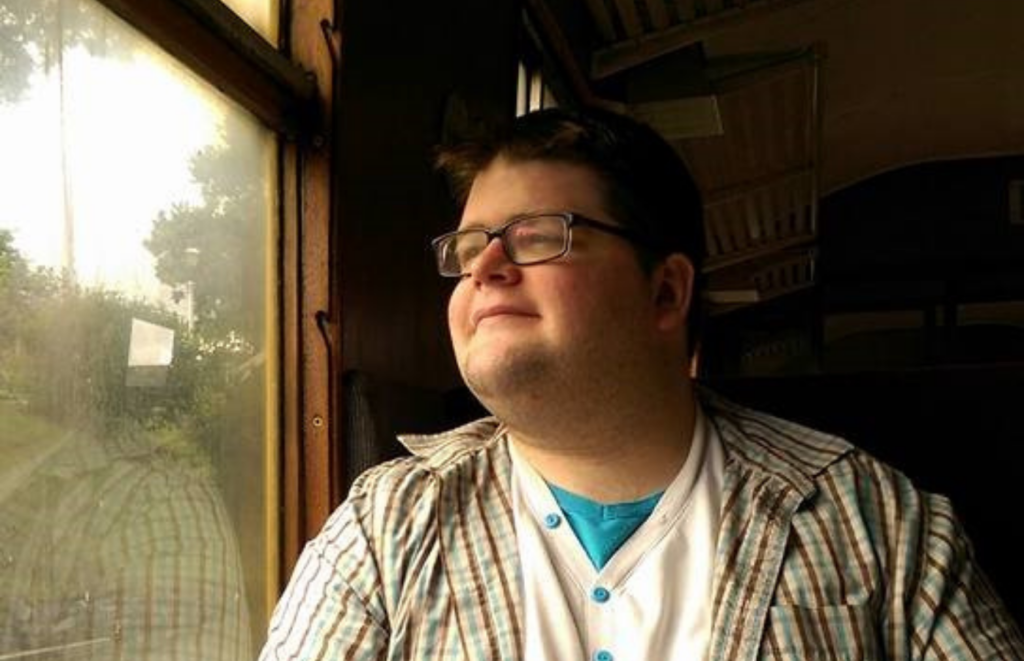